Yatanarpon gives up on LTE and drops the price on FTTH

End of 2016, Yatanarpon Teleport took part of this crazy 4G LTE auction bid that saw two companies won hands down the two biggest regions in Myanmar. At that time, we believed YTP finally got the weapon to regain its historic glory.

It was a time when these two ISPs represent the only mean to get Internet in Myanmar.

Since then, mobile operators have launched their services in 3G then 4G with very aggressive pricing relegating the legacy ISPs to nostalgic customers and big corporates looking for unlimited service. Then, new ISPs started popping up at an incredible rate, small players with high ambition but limited capabilities, still eating up slowly into YTP and RedLink customer base.

From a market perspective, the impression is that both RedLink and YTP rested on their laurels for some times and it was high time they start doing something about it.

Early this year, RedLink decided to give up and left by the backdoor, taking in its grave bad customer stories and outstanding debt as well.

As for Yatanarpon, the public ISP had big plans. Thanks to the new spectrum award, it got access to a mature and powerful technology: TDD LTE.

4G LTE, a technology of choice

Rural WISP in the U.S.

We called them the WISP: Wireless Internet Service Providers.

They start by building the backhaul with an unlicensed microwave to bring the Internet signal from the nearest big city to their town. Then they pick a high tower or a water tank as an emitter and broadcast the signal over a few kilometers radius thanks to unlicensed wireless once again. On the customer side, small receivers are installed on rooftops to amplify the signal.

NetCore, Truenet or in a different flavor MyanmarNet use the same setup in Yangon.

Unlicensed by essence is not reliable. Everyone can jump into your Wifi channel, jam your network, interfere your service and there is nothing you can do about it, at least legally. This is why giving away so many licenses in the Myanmar market is a big concern and the Posts and Telecommunications Department (PTD) has rapidly taken action to regulate the use of unlicensed spectrum.

As these U.S. WISPs get bigger, they have been slowly transitioning to licensed wireless in 2.5Ghz and 3.65Ghz bands using Wimax and more recently TDD LTE as a technology of choice.

Technology progressing, it is now even possible to use both licensed and unlicensed channels in a carrier aggregation fashion to provide faster speeds to customers.

As the industry is now moving to 5G, TDD LTE is a mature technology providing fast broadband speed for a TCO (Total Cost of Ownership) lower than FTTx.

YTP realized that and it sounds that the ISP is now trying to withdraw its bid. Are we going to live another auction? Or the spectrum will be automatically given to the third applicant?

As for Amara, the new ISP is not going to give up and is working actively on building its team and new network. It is more likely that the new ISP will launch service end of 2017, beginning of 2018.

Coming back to YTP, this setback did not put it down. Yatanarpon is committed to not live the same fate as its brother in arms RedLink. As such, YTP is going through a complete sales and marketing revamp.

Starting in March, we have noticed the ISP being much more active on Facebook, social network that it let down for some time now.

The website has also been refreshed. The new Drupal website adopts all the new codes: flashy slideshow, chatbox, signup form. Good job for the chatbox and signup form that we already recommended in our recent article: Top 10 ideas to build a successful ISP in Myanmar. There is still a lot of work to do on the brand and marketing materials but the improvement worth to be noted.

As for the price, the new priceplan is attractive. Installation fees are set to 120,000 Ks which sounds very reasonable for a FTTx service and in line with the new competition (Myanmar Speednet for instance).

If we take the example of a 2Mbps residential service, Yatanarpon is among the most competitive plans in the market. 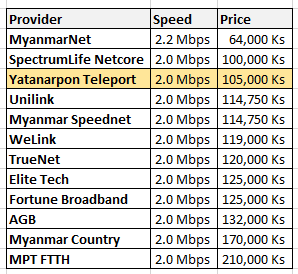 Myanmar Speednet price above is a special and limited promotion

With this new pricing, Yatanarpon is back in the game. But to improve its image, YTP has to upscale the network performance which has been a big source of complains for years. Setting up an image of a good reliable provider is a slow and painful process. Some have decided to give up like RedLink that started over from scratch with 5BB Broadband. Yatanarpon has the courage to take the long path and build it up.

Congratulations YTP and good luck down the road.