October 14th, MPT announced in front of the press the launch of its 4G network. MPT is the last of the mobile operators to launch 4G after Telenor in July and Ooredoo in May earlier this year.

MPT 4G will only be available in specific indoor locations such as MPT Sule Branch, Junction Centre Maw Tin, Junction Square Centre and Taw Win Centre as well as in Nay Pyi Taw at Junction Center and Capital Hyper Market

Our expert team have decided to test the service in Junction Square and here is the result.

If you are a fellow reader, you may have noticed that we raised concerns already regarding these 4G launches in Myanmar that sound like big marketing events with no real technology breakthrough.

Before digging into our test results, let us explain you why.

The most valuable and scarce resource in the telecom world is spectrum. Spectrum allocation is necessary to operate license-based technologies such as 2G, 3G, 4G or later 5G. Telecom operators in Myanmar received spectrum to operate 2G and 3G with their license in 2013, as detailed in the table below.

As for 4G, it is a different story. 4G is available in different bands, the most popular being:

4G can squat 2G and 3G bands upon refarming of the respective bands to make room for the new technology.

Refarming basically means reducing the span and consequently the bandwidth resource allocated to former technologies like 2G or 3G to re-allocate for new technology such as 4G LTE.

As mobile operators own limited 2G and 3G ressources, refarming sound like a bad idea as it means compromising on their 2G or 3G performance to launch a new network with limited spectrum.

The other option remains to wait for new spectrum allocation. 2600Mhz was auctioned and awarded very recently but mobile operators decide to pass on it. The reason is more likely that it was impossiblt to win the spectrum nationwide. Auctions were divided in regions and bidders can only win 2 out of 3 regions.

Next option is 1800Mhz auction that will more likely happening in 2017. Mobile operators shared publicly their strong intention to bid for it.

So the wise thing to do would have been to wait for this new auction before launching 4G. This is without counting with the marketing effect of a 4G launch too tempting for operators in tough position such as Ooredoo that was the first to pull the trigger and announced its 4G launch in May 2016.

Telenor had to respond to that. There is no way they will let a competitor even in bad shape claiming to be one “G” ahead.

Telenor response was smart. They launched 4G in Nay Pyi Taw, close to the officials, in a location where data traffic is probably low and would not suffer any service degradation after refarming.

On a side note, from our own experience, Telenor 3G performance in Yangon is excellent and can probably wait a couple of quarters for a 4G upgrade.

Comes the time for MPT to do its announcement. As for Telenor, MPT strategy is not to cannibalize its current and scarce mobile resources and they decide to go for Indoor Building Solution (IBS). IBS is mainly used to overcome coverage and quality issues and increase capacities in big buildings like malls or business centers.

We can’t really call it a launch. 4G is a mobile technology. It should allow the customer to roam as he wishes within an indoor/outdoor area. In the case of MPT, 4G is literally absent as soon as you exit the building. Very similar to a WiFi hotspot. This is not a launch, not even a soft launch or a pilot, it is a showcase.

But is it a good showcase?

So coming back to our tests, we bought a brand new 4G SIM from MPT. Yes, the downside with MPT 4G is that you need to buy a new SIM card. And we topped up a few thousand kyats for a data package (the packages in 4G are MPT standard Internet plans) to enjoy our 4G LTE experience.

Comfortably sitting at a cafe in the mall, we started to test the state-owned operator new network.

Coverage in the building is excellent according to our radio tool. However we faced a few fallback in 3G HSPA+ and even in 2G. It was really strange considering the signal quality, radio optimization is required to make sure mobile users stick to 4G. MPT fallback to 3G HSPA+ from time to time

Speed-wise, we ran a few speedtest both with speedtest.net and fast.com (Netflix speedtest) and reached respectively 25mbps and 16mbps.

We ran speedtest.net multiple times and the results always come up around 25mbps. The 4G cell looks quite empty and performance is good overall if we put the 3G fallback on the side.

Can we really name 4G a network that achieves 25mbps of max throughput?

According to ITU, the answer is no, you need to achieve at least 100mbps throughput to be called 4G.

The main reason behind this performance limitation is spectrum refarming. According to this excellent article, achieving 100mbps in 4G requires at least 2x20mhz in FDD (with no diversity).

MPT does not have such spectrum available.

Using the 4G LTE throughput calculator from the8layers blog, we managed to explain our speed results.

According to the template, if we use a 5mhz span with diversity 2 and 64QAM modulation (achievable thanks to IBS), we should be able to reach 32mbps max throughput.

As we can see, achieving good speed in 4G consumes a lot of spectrum. Refarming 2G would certainly make sense at some point as smartphone penetration increases pushing customers to 3G and 4G. Still, refarming 3G as of today looks like a mistake.

We also ran a few pingtests to test latency on the radio access network (RAN). One of the big advantages of 4G is low latency. In 3G, you can expect 30-50ms between your cellphone and the nearest base station. In LTE, it is reduced to 10ms. This is a huge improvement that would certainly please the gamers. 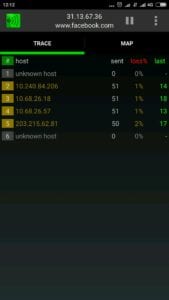 Here we enjoy the same thing. Latency to MPT core network is around 10-15ms.

As MPT caches Google, Youtube and Facebook, requests are directly served from the operator network in 10-15ms which is definitely impressive. Reaching Facebook in 10ms in Myanmar. Time changes!

Regarding coverage, we confirm that the solution is only available inside the buildings listed in the press release. As soon as the customer leaves the building, he will fall back in 3G.

In conclusion and as expected, this new 4G launch sounds definitely like a flash in the pan. MPT had to react and launched 4G to stick to follow the pack but it is nothing more than a big showcase which ends up to be disappointing performance-wise.

Development of IMT-Advanced: The SMaRT approach