Four years down the 4G auction, mixed results for ISPs in Myanmar

Almost four years ago, Myanmar Post and Telecommunication Department (PTD) published the result of an historical bid for the acquisition of 4G spectrum. This bid was reserved for Internet service providers and mobile operators were requested not to participate.

For this bid, the country was divided into three lots.

Four years down the road

Four years after the award, Amara has launched services in Yangon and Mandalay. Ananda offers a variety of pure data services: “on-the-go”, customers can choose to buy a portable hotspot or a data-only SIMs to insert into their phones as the second SIM. Ananda also offers a home bundle with a WiFi router capable of covering a small household.

Yatanarpon Teleport withdrew its bid in 2017 and decided to focus on fiber to the home.

Fortune launched in three cities in South Myanmar: Dawei, Mawlamyine, and Myeik on Nov 19. The service costs only 26,000Ks per month for a mobile broadband service up to 6mbps.

The expectations were high for this spectrum allocate and the outcome is overall surprising.

Globalnet and Fortune are certainly the big winners of this bid. Both have come with a reasonable bid for a region that draws less attention.

Both ISPs are highly-experienced fiber providers. This acquisition is a perfect combination to cover more ground specifically in areas in areas where fiber is not profitable.

It took three years for Fortune to launch their 4G broadband service in Mawlamyine, Myek, and Dawei. Yet, they come up with a simple offer with an attractive price point. This new broadband offering is welcome in the south where the options are limited.

Yatanarpon Teleport sensed a change in the wind

At the time of the bid, the broadband market was divided into two camps: FTTH and WiFi Providers.

FTTH installation is a long and expensive process. The installation cost was initially charged back to the consumer which presented a big barrier to entry for Myanmar people. Elite, Fortune, or Yatanarpon charged 500,000 ks ($450) for FTTH installation back in 2016.

WiFi installation was cheaper, still not exactly plug and play. If you decide to signup for Wifi Internet, you have to schedule an appointment with the service provider to install the service. The setup consists of an external directional antenna installed on the rooftop of your building.

In crowded areas like downtown Yangon, multiple ISPs are operating with WiFi. As wireless technology is completely unlicensed, service providers are running on the same frequency bands. Wifi interferences are therefore inevitable and significantly alter the user experience.

In this landscape, LTE/4G broadband sounds extremely attractive: the technology is mobile, plug and play and immune to interference.

But then came the broadband price war. The number of ISP licensees kept rising and the new boys in town decided to crash the prices. Some of them were bold enough to build fiber networks in Yangon without permission, giving them a strong competitive advantage as they managed to reduce the installation time. To sustain their growth, the new ISPs didn’t hesitate to subsidize installation costs reducing the barrier to entry.

In this new competitive environment, the launch of a 4G broadband network was viable but the business case was not the same. Yatanarpon Teleport decided that the risk was too high and withdrew its bid.

In 2018, Ananda made a big splash with inspirational billboards, cool TV commercials, and Facebook ads. If you lived in Yangon at that time, you felt something big was coming.

Unfortunately, the technical execution was not up to the marketing campaign. To put it simply, the provider network was not ready.

Service providers usually have what we call a “honeymoon period”. At the service launch, the network is empty therefore the first subscribers can enjoy amazing speed, superb quality of experience. As the ISP acquires more and more customers, the network load increases, contention ratios kick-in and the network speed start to fluctuate between peak and off-peak. The service provider has to find a good balance between capacity and utilization, between cost and quality of experience. 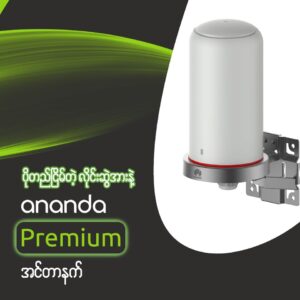 Technical issues aside, the newly born Internet service provider took a big risk by launching the service in the most crowded and competitive place in Myanmar: Yangon. And it was probably not the right choice.

It would probably seem unfair to compare Ananda’s fate with the 4th mobile operator: Mytel. Still, there is a good lesson to learn from the latter. Mytel launch strategy was radically different and probably a lot smarter. The military-backed operator was well aware that launching years after three well-established telcos was going to be challenging. As such, the military-backed operator chose to push where the existing players were the least present: the countryside.

It is important to note that Mytel is 49% owned by Viettel, the rest of the stake is controlled by a conglomerate of Myanmar companies. To the new operator, Viettel brings its strong telecom experience from years of operations all over the globe. Viettel is well known in the telco industry for its aggressive and disruptive go to market strategy, both from pricing and coverage standpoint. The Vietnamese group takes pride in building a network where no competitor wants to go.

Mytel chose the wealthy state of Shan as its primary battlefield for subscriber acquisition. One vivid example is the fact that Mytel offered customer service in Shan language from day 1. Mytel was operating for three months already when it decided to make its big move to Yangon announcing at the same time that it reached 1M subs.

Since then, Mytel growth has been steady. The new mobile operator shines by the quality of its network as demonstrated by the recent Opensignal results.

There is no comparison technology or budget-wise between Ananda and Mytel. Still, we cannot help thinking that Ananda would have been more successful by starting with mid-size cities where the competition was less present. As all the eyes were turned to Yangon, Nay Pyi Taw and Mandalay, other cities were sadly let down. Despite the mobile operator’s efforts to cover the most population, it is still frequent to face mobile coverage issues in Myanmar and all the more challenging to find solid broadband connectivity outside of Yangon, Nay Pyi Taw and Mandalay.

Another disappointment for Ananda is the lack of value-added services. We stand three years after the launch and the new ISP is still providing a dumb pipe of data. At first, the company website gives the impression that the product portfolio is diverse.

But at the end of the day, this is all the same thing: basic Internet services with or without a wifi device. Where is the innovation? How to keep the subscribers’ captive which such a simple and basic offer?

Ananda is competing with Internet service providers but also with mobile operators such as Ooredoo and Telenor that launched their 4G broadband boxes. The telcos are taking advantage of their massive brand awareness and sales channels to invade the market. There is no way Ananda can compete on the same ground. It must seek technological advantages.

The good thing with emerging markets is that it is not always necessary to find pure innovation. Some old recipes from mature markets can simply be re-used or copied. Looking at the history of telecom outsiders, two examples come to mind:

MyRepublic in Singapore, Free in France

They managed to survive and thrive in such competitive markets by being extremely innovative, always looking to be the first to launch disruptive products. In their respective markets.

They also built strong brands by targeting specific segments whereas well-established telcos look for the masses.

For example, MyRepublic has become the preferred ISP for gamers in Singapore. To achieve this, they work hard on their network connectivity to gaming servers and proudly show-off the results online.

Free in France has always been very popular among the tech-savvy /geek community by offering the last technical features (IPv6 ready network, streaming server) and the most advanced hardware (5gbps Wifi AC Freebox).

Likewise, Ananda has to find its true identity, differentiate its offering from the competition if it wishes to survive. It cannot simply rely on vanilla internet plans that stand in direct competition with mobile operators.

Three years down the road, we would expect the service provider to bundle its Internet service with voice and TV, offering triple-play services to its end customers. This would have been a big breakthrough to the Myanmar market which still lacks such bundling.

Over the past 12 months, Myanmarnet and AGB have signed partnerships with PayTV provider Canal+ to bundle TV with their Internet plans. Still, no one is providing VoIP on top of Internet.

Ananda has immense pressure to recover the steep spectrum fee not even talking about the network infrastructure deployed in Yangon and Mandalay. Every single bit of capacity has to be monetized to keep hope in a return of investment. Providing basic data plans simply won’t do it.

Ananda also needs to look at mid-sized cities. And probably be creative in their deployment to keep the overall TCO as low as possible. TDD-LTE has been considerably democratized for a few years and is now widely deployed in emerging markets to replace WiFi Service Provider networks.

Mikrotik, a brand well known by wireless providers is now selling cost-effective LTE base-stations. It is nowadays possible to deploy a complete LTE network for a fraction of the price from a few years ago.

A possible opportunity for Ananda would be to sub-lease its spectrum to regional ISPs. Letting them roll-out the network, invest in sales and marketing while Ananda receives royalties for the spectrum. But it is unlikely that this strategy would generate enough revenue to keep the ISP afloat.

Considering the broadband penetration in Myanmar, there is still a lot of room for growth for new service providers but innovation is key. It is not a coincidence that the most innovative ISP in Myanmar (MyanmarNet) is constantly announcing new rounds of financing.